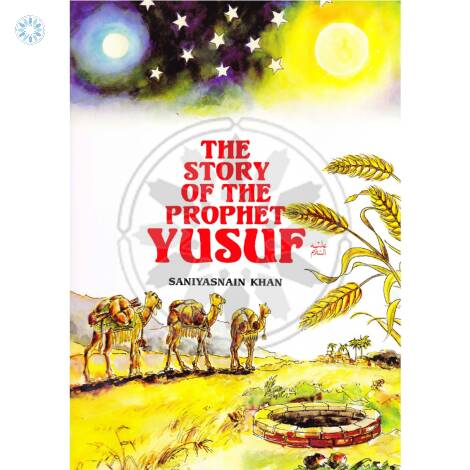 The Story of the Prophet Yusuf

The Story of the Prophet Yusuf

Long, long ago in a far away place in Canaan, near Nablus, some thirty miles north of Jerusalem, lived a pious old man. His name was Yaqub. Yaqub was the grandson of the great prophet Ibrahim. He had twelve sons. Yusuf was the second youngest of them. From the very beginning his father was much impressed by this young, noble and gentle soul, for whom he saw a great and promising future. One day Yusuf who was a boy of keen intelligence and a kind nature, had an unusual dream, in which eleven stars and the sun and the moon, all bowed down to him.

Saniyasnain Khan is a children's author with over 100 children's books to his credit. These are on subjects relating to Islam. A number of his books have been translated into French, German, Turkish, Danish, Dutch, Polish, Swedish, Bosnian, Norwegian, Russian, Uzbek, Arabic, Malay, Bengali, Urdu, Persian, Russian and Chinese. He has also created board games for children on Islamic themes.

A trustee of the Centre for Peace and Spirituality (CPS International) – a non-profit, non-political organization working towards peace and spirituality, he contributes articles on Islam and spirituality to English newspapers.

He does a weekly TV program, "Islam for Kids" on ETV Urdu and was a co-host of Kahaniyan Quran Se (Stories from the Quran) which was telecasted on ZEE-Salaam. Recently he was recognized by the Limca Book of Records.

His book, The Story of Khadija has been awarded Sharjah Children's Book Award He is mentioned in a study done on the World's 500 Most Influential Muslims by the George Washington University, USA.

Islamic scholar, Maulana Wahiduddin Khan, felt the desire to give expression to his positive ideas by establishing the Islamic Centre in Delhi in 1976 and it was then, with this humble attempt, that the journey towards the inception of Goodword began.

The Maulana’s endeavour to present the peace-loving message of Islam led to the widespread acceptance and popularity of his books. At this point, the need to bring out high quality children’s books was felt and so the Maulana’s son, Saniyasnain Khan, took the initiative and founded Goodword Books in 1996. This organization has been wholly dedicated to producing meaningful and wholesome books which lay emphasis on Islamic and moral values.

Islam is the religion of peace and harmony and it was felt that there was a pressing need to educate the new generation about this. It was felt that if this new generation could be taught about the real Islamic idealism and other human values, they would surely become little ambassadors of Islamic goodness.

With this objective in mind, Goodword endeavours to present children books on islam which provide a solid foundation of Islamic and moral values through themes carefully chosen from the Quran and other Islamic sources. In this way children not only learn the ethical values conveyed by the message of Islam, but they also become stimulated to learn about Islamic ideals when they grow up. Goodword’s books combine simple texts with imaginative illustrations, it being widely accepted that words and pictures together are most effective with young readers. Goodword’s aim is not only to make children aware of Islamic values and moral teachings, but also to make them so enamoured of them that they embody them in their lives.

Besides children’s books, Goodword islamic book publishers also publishes books for adults. These range in subject matter from history, religion and philosophy to dawah and Arabic learning. Goodword has already produced a vast body of well researched books on Islam and Islamic history, all written by noted scholars and academicians. The rich collection of books presented by Goodword makes it a leading name in the publication of meaningful, authentic books on Islam.