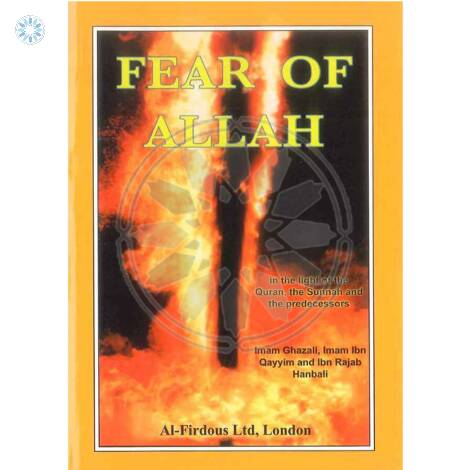 This Islamic book explains the fear of ALLAH, its necessity, its virtue and its manifestation in the believers. ALLAH warns us in the Quran of those who do not fear Allah and let their desires govern their lives and the harm this causes to all those around them. Based on works by Imam Abu Hamid Al-Ghazali & Imam Ibn Al-qayyim Al-Jawziyah & Imam Ibn Rajab Al Hanbali

'Know! Dear Muslim brothers and sisters. We can find out whether we fear Allah or are oblivious to him through some simple tests. Here are some of them:

The Proof of Islam Imam Abu Hamid Muhammad ibn Muhammad al-Ghazali (d. 1111) jurist, legal theorist, logician, theologian, and mystic was a master of both the outer and inner sciences of the Shariah who is regarded by many as the greatest Muslim thinker to have lived after the Pious Predecessors. Credited with dealing the death blow to Aristotelian philosophy in the Muslim world and bringing authentic Islamic spirituality into the mainstream, his life and thought were extremely influential in shaping the spiritual values and practices of medieval society and are no less relevant today.

Ibn al-Jawzi was a prolific author of over seven hundred books.

He was the author of a vast number of works of which several have been printed in recent times. He was famous as a preacher and the traveller Ibn Jubair gives an enthusiastic account of two of his sermons heard in Baghdad.

He was born in 509/510 AH in the city of Baghdad and grew up studying under the leading scholars of the time, He also was noted for his scholarship in the fields of history, linguistics, Tafseer and fiqh.

In fact, he became the leading scholar of the Hanbali Madhab of his time and played an important role in reviving and spreading it, especially after he becomes a favourite of the Abbasid Caliph, al Mustadi

Ibn al-Jawzi was severely tried towards the end of his life when his criticism of Shaykh `Abd al-Qadir al-Gilani - his senior of forty years - led to accusations made against him to the Sultan al-Nasir by the Shaykh's children and supporters.

He was taken from Baghdad to the city of Wasit where he remained imprisoned for five years.

Ibn al-Jawzi passed away in 597 AH,  two years after his release from Imprisonment.

Ibn Rajab al-Hanbali was a Muslim scholar born in Baghdad, Iraq in the year 736 AH/1335 CE and a popular exponent of the legal school of Imam Ahmad b. Hanbal. His father was known as Rajab al-Salami, and from this, he acquired the byname, Ibn Rajab. At the age of eight, he relocated from Baghdad to Damascus with his father, and this is where he began his study of the Islamic disciplines. In Damascus, he studied the variant Quranic modes of recitation and amassed great knowledge from the Damascene scholars. He would eventually travel in search of greater knowledge to Mecca, Egypt, and other regions. Ibn Rajab excelled in the study of hadith and became recognised as the greatest hadith master of his time. He was also an extremely effective sermoniser and lecturer who touched the hearts of his listeners through his wisdom and charisma. Also adding to his greatness is the love and esteem in which he was held by people of diverse ideological orientations. His writings reveal a wide range of expertise covering subjects like economics, law, legal maxims, hagiography, history, ethics, spirituality, exegesis, and most importantly, hadith science. His biographers unanimously agree upon his piety, scrupulousness, ex- exemplary behaviour, charisma, wisdom, and mastery of the prophetic tradition. He died on the 14th day of the month of Ramadan in the year 795 AH/1392 CE and is buried in the Bab al-Saghir cemetery in Damascus.