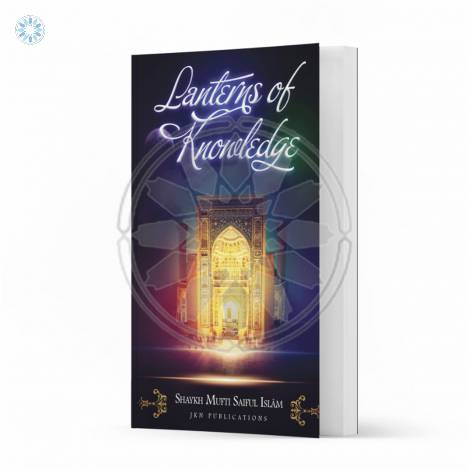 Once the commentary of Kitabul Ilm in Bukhari was completed, we realised that this chapter is an entire topic in itself. due to its fascinating and insightful perspective on knowledge. When compiling this commentary, there were many beautiful reminders as well as points of guidance for everyone's personal life as well as their life long quest for knowledge. Therefore, the Commentary of this chapter alone would be beneficial for all seekers of knowledge and the idea of publishing a separate book came to mind.

it is hoped that this book will be a means of inspiration and guidance for all the students and teachers of Deen as well as seekers of knowledge in general. May Allāh سُبْحَانَهُ وَتَعَالَى‎  accepts all the efforts for those students who contributed to compiling this inspirational book, without them, this task would not have been possible. Amin.

Shaykh Mufti Saiful Islām was born on the 17th of Rajab 1394 A.H (6th of August 1974) in the small village of Duhal in the town of Biswanath, district Sylhet, Bangladesh. His father was Muhammad Ali and his grandfather was Soyd Ali. He is the second eldest of four brothers and three sisters. He was initially given the name Shamsul Islām by the elders of his family but later his uncle kept his permanent name as Saiful Islām.

On the 1st of March 1981, Shaykh Mufti Saiful Islām’s father decided to take the family to the UK. They settled in the city of Bradford which is situated in the Yorkshire region of England.

In the year 1987 at the age of 13, Shaykh Mufti Saiful Islām successfully completed his Hifzul-Qur’ān (memorisation of the Holy Qur’ān) at his local Maktab, Tawak’kulia Jāmi Masjid in Bradford, UK. He also studied basic Urdu, Fiqh, Islamic History, Sarf (Etymology) and Nahwa (Syntax).

In 1988, Shaykh Mufti Saiful Islām was admitted in the grand Dārul Uloom in Bury to pursue his knowledge further in the field of Islām. This was when he first met Shaykh Yūsuf Motāla Sāhib.

In 1996, Shaykh Mufti Saiful Islām went through hardships and sacrifices for establishing Jāmiah Khātamun Nabiyeen (JKN) from his residence. With the Infinite Grace, Mercy and Help of Allāh, JKN accelerated to become a nationally and internationally recognised institute of learning.

As well as the Founder, Principal and Director of JKN, Shaykh Mufti Saiful Islām took up responsibilities in many other departments locally, nationally and internationally. He is the Editor of “Al Mu’min” the famous family magazine.

He is the patron of Al Mu’min Primary School, Olive Secondary Schools for both boys & girls and Al-Hudā Academy in Oldham. Shaykh Mufti Saiful Islām is also the Founder and Patron of Jāmiah Zakariyya, situated in Biswanath, Sylhet and also Jāmiah Al-Kawthar, which is situated in Netrokuna, Mymensingh as well as many other Makātibs in Bangladesh.

Shaykh Mufti Saiful Islām has been teaching the Holy Qur’ān and Islamic knowledge since his student years at Dārul Uloom, Bury. Ever since the establishment of JKN he has taught every subject from the basics of Arabic, Fiqh and Tajweed etc. through to Usool, Hadeeth and Tafseer.

His works include many compilations and supervised books such as Pearls of Wisdom, Miracle of the Holy Qur’ān, Stories for Children, Islamic Poems, Clear Proofs of Allāh, Who is the Monkey? The Miracles of the Holy Prophet (s.aw), What’s with the Monkey Business?, Ziyārat of Madeenah Munawwarah and Ādābul Muāsharāt, as well as much other literature.

His latest work “Your Questions Answered” has been a long term project. During his Iftā at Dārul Uloom, Bury, Shaykh Mufti Saiful Islām was assigned the task to research and answer contemporary Fatāwas as part of the completion of the course. He worked on numerous Fatāwas and eventually completed his Iftā course to become a qualified and authorised Mufti.

On a daily basis, his 24-hour timetable is scheduled around worship, teaching the Holy Qur’ān and Ahādeeth, research and study, helping people and dealing with issues affecting their daily lives, directing and supervising all the projects of JKN and answering questions regarding religious issues based on the Islamic Law put forward by people from all walks of life.