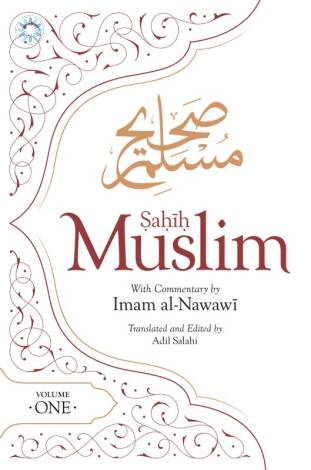 After the Qur’an, the prophetic traditions (Hadith) are the most recognised source of wisdom in Islam. These traditions offer readers down the ages a glimpse of Prophet Muhammad’s sayings and actions. Amongst the Hadith literature, Sahih Muslim is second only to the collection of Imam Bukhari, and is recognised by scholars of history and religion for its reliability.

The hadith collection of Imam Muslim (d. 261CE/875AH), like that of Bukhari, has been the object of innumerable commentaries since its compilation. However, there is no doubt that one commentary stands out as the most authoritative—namely that of the great Damascene scholar and prolific author Imam al-Nawawi (d. 676CE/1277AH).

Imam al-Nawawi’s commentary on Sahih Muslim is one of the most highly regarded works in Islamic thought and literature, and often referred to as a super-commentary. Accepted by every sunni school of thought, and foundational in the Shaafi school, this text, available for the first time in English, alongside the original Arabic text and translation of all the hadiths, is famed throughout the Muslim world.

Translated by Adil Salahi, a modern scholar of great acclaim, this immense work is an essential addition to every Muslim library, and for anybody with an interest in Islamic thought.

Other Volumes Included in the Sahih Muslim

Adil Salahi is a scholar, author and translator, who has written or translated into English various books on Islam. After working for the BBC Arabic Service for several years, he worked for the Arabic daily, al-Sharq al-Awsat. He continues to publish many Articles in various Publications including , Arab News, a an English daily published in Saudi Arabia. Adil Salahi taught at the Markfield Institute of Higher Education, Leicester, England. His popular biography of the Prophet, Muhammad: Man and Prophet, is widely respected and has been translated into multiple languages.