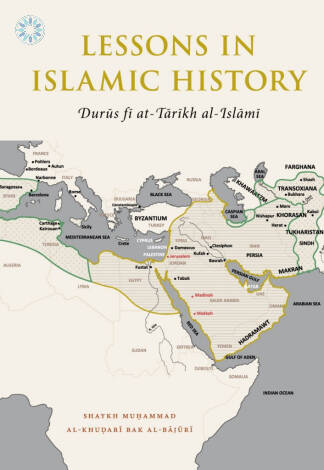 Lessons in Islamic History is an essential summary of Shaykh Muhammad Khudari Bak’s series of groundbreaking works on Islamic history, in which this pioneering Egyptian historian and scholar of Shari’ah and Arabic literature distil the essence of his three outstanding works on the Prophetic Biography, the Rightly-Guided Caliphs and the Umayyad and ‘Abbasid Dynasties. In his distinctively eloquent yet uncomplicated style, he traces the changing political and social circumstances of the Islamic peoples from their origins in the pre-Islamic Arabic Peninsula until his own time in the Ottoman Khedivate of Egypt. An instinctive educator who explained that he wrote not merely to record history, but so that history might benefit, the author outlines the vicissitudes of Islamic history with refreshing objectivity and restraint, highlighting the lessons to be learnt from past events. In an era when competing historical narratives vie for supremacy, this text provides a clear and concise account of Muslim leadership throughout history and its consequences for the Ummah. As such, it is an indispensable read for young and old alike.

He is Muhammad ibn Afifi al-Bajuri, popularly known as Shaykh Khudari Bak. He was a scholar of Shariah, literature and Islamic history. He was born in Egypt in 1289/1872 and lived in Zaytun, a suburb of Cairo. He graduated from Madrasah Dar al-Ulum and surpassed his contemporaries as a scholar, researcher, orator, educator and reformer. During the course of his life, he was an Islamic judge in Khartoum, an educator in the Islamic Judicial School in Cairo for a period of twelve years, a Professor in Islamic history at the University of Egypt (now named The University of Cairo), the deputy head of the Islamic judicial school and an inspector for the Ministry of Education.