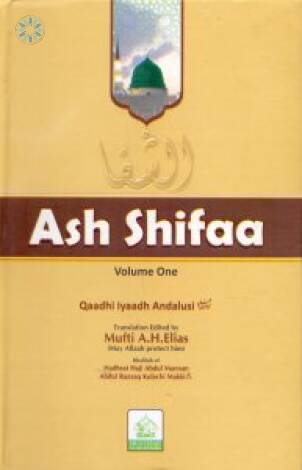 This book is a translation of Qaadi Iyaadh's book Ash Shifaa in Arabic. It is perhaps the most frequently used and commented upon handbook in which the Prophet's may Allah bless him and grant him peace life his qualities and his miracles are described in every detail. This work was so highly admired throughout the Muslim world that it soon acquired a sanctity of its own for it is said &quotIf Ash-Shifa is found in a house this house will not suffer any harm... when a sick person reads it or it is recited to him Allah will restore his health.

About the Author Abul Qaadi Iyaadh ibn Musa ibn Iyaadh al-Yahsubi Qaadi of Ceuta during the time of the Murabitun. He travelled to Andalus to study and in Cordoba he learnt from such luminaries as Ibn Rushd the grandfather of the Qaadih and philosopher of the same name. Iyaadh was already accepted in scholarly circles when he was eighteen and was appointed Qaadih when he was 35 becoming first the Qaadih of Ceuta in 515 AH/ 1121 CE and later Granada in Spain in 531 AH/ 1136 CE. He was exemplary in his knowledge of the sciences of hadith from which ocean he drew his astonishing work Ash Shifaa. He also wrote the Foundations of Islam on fiqh and Tartib al-Madarik on the luminaries of the school of Madina. He opposed Ibn Tumart's claim to be the Mahdi and was exiled to Marrakech where he was murdered.