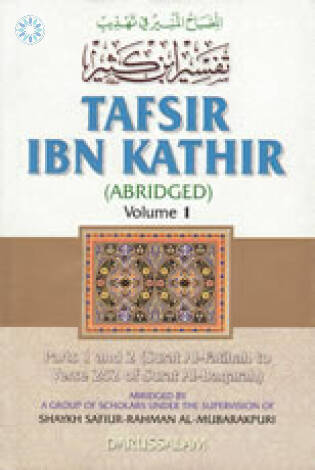 The Qur'an is the revelation of Allah's Own Words for the guidance of His creatures. Since the Qur'an is the primary source of Islamic teachings the correct understanding for the Qur'an is necessary for every Muslim. The Tafsir of Ibn Kathir is the most renowned and accepted explanation of the Qur'an in the entire world. In it one finds the best presentation of Ahadith history and scholarly commentary.

Translated and abridged by a group of scholars under the supervision of Shaykh Safiur-Rahman Al-Mubarakpuri.

About the Author He was Hafidh Abul Fida Ismail ibn Abi Hafs Shihabuddin Omar ibn Kathir ibn Daw ibn Kathir in Zar the Quraishite originally from Busra (Syria) and raised in Damascus. He followed the Shafiee school of thought. Ibn Kathir was born in the year 701 AH in an area called Majdal near Busra west of Damascus. His father died when he was only four years old and was taken in by his brother and moved to Damascus in 706. Here he learned from great scholars such as Ibn Asakir Ishaq ibn Yahya al-Amudi and the great Ibn Taymiyyah who was extremely close to him. He also studied under various other sheikhs who gave him permission in fiqh and Hadith. He made many academic contributions to Islamic sciences. The following are amongst his most prominent

Al-Hafiz Ibn hajar Al-Asqalani said Ibn Kathir lost his sight just before his life ended. He died in Damascus in 774A.H. May Allah grant him Mercy and make him amongst the residents of Jannah (Heavenly Garden).