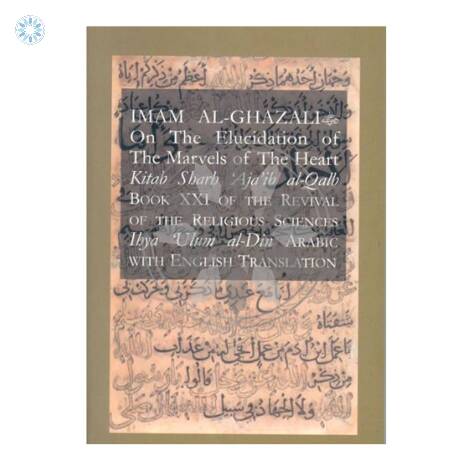 This is a translation of the book Kitab Sharh 'Aja'ib al-Qalb (On the Elucidation of the Marvels of the Heart). The original Arabic volume is Book XXI (21) of the classic work Ihya 'Ulum al-Din (the Revival of the Religious Sciences), which Imam Abu Hamid Al-Ghazzali wrote.

To appreciate the value of this book, there are no better words than Imam an-Nawawi who said that if all the books of Islam disappeared except The Book of Allah and the Ihya, it would suffice you.
This volume elucidates the marvels of the heart. The Imam deals authoritatively with heart diseases and their cures.

Abu Hamid ibn Muhammad ibn Muhammad al-Tusi al-Shafi’i al-Ghazali (or al-Ghazzali) was born in 450/1058, in Tus (located in present-day Iran). He studied under the great theologian and jurist Imam al-Haramayn al-Juwayni (478/1085) and produced a number of texts on Islamic law and theology. At the age of 34 he accepted a position as rector and professor of the Nizamiyya College in Baghdad. He remained busy teaching, refuting heresies, and responding to questions from all segments of the community. During this period he produced the celebrated works The Objectives of the Philosophers (Maqasid al-Falasifa), followed by The Incoherence of the Philosophers (Tahafut al-Falasifa), in which he strongly challenged Peripatetic philosophy. Thereafter, facing a personal spiritual crisis, Imam Ghazali abruptly left his position and spent the next ten years in or between the cities of Damascus, Makka, Madina, and Jerusalem. During this period, he wrote the seminal Revivification of the Religious Sciences (Ihya’ ‘Ulum al-Din), a grand work of forty books outlining the significance and wisdom underlying the practices of Islam. At this point, Imam Ghazali returned to teaching in Nishapur and finally in his birth place of Tus, leaving a legacy of works that synthesized jurisprudence, philosophy, theology, and sufism. Imam Ghazali died in 505/1111 in Tus and in short time was recognized as the reviver (mujaddid) of the century, celebrated ever since among Muslims as the Proof of Islam (Hujjat al-Islam).

Shaykh ‘Abdul Jabbar ‘Umarpuri was a great Arab and Persian poet. He would recite some of his poems in the annual conference held in Dar Al-Ulum Nadwah Al-Ulama and they were appreciated by scholars. Shaykh Abul Hasan An-Nadwi gave some of these poems to Shaykh Suhayb Hasan.

Shaykh ‘Abdul Jabber ‘Umarpuri passed away in Shawwal 1334H, 1916. He was buried near his beloved teacher Mian Nazeer Husayn Ad-Dehlawi in Shaydi Purah cemetery in Dehli.

Ta-Ha Publishers Ltd. was established in 1400 AH/1980 CE, when our first small book was published. Since that time, we have been responsible for over 250 publications, some 150 of which are currently in print and distributed worldwide.

Our titles range from recent translations of early classical works by Muslim scholars to more modern issues tackled by contemporary authors. In fact, there is something for Muslims and non-Muslims of every age.

It has always been and continues to be the aim of Ta-Ha Publishers to assist in making the teachings of Islam more readily available and accessible for everyone.