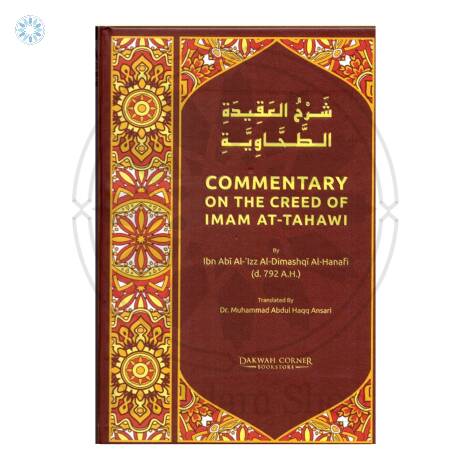 Commentary on the Creed of Imam At-Tahawi

Commentary on the Creed of Imam At-Tahawi

The pious predecessors have placed utmost importance on the preservation of the pure Islamic ‘aqidah (creed) on practical and theoretical grounds, free from all superstition, innovation, false interpretation, and denial. They did so by education, authorship, dialogue, and debate.

Among the highly regarded books on this subject is The Creed of At-Tahawi of Imäm Abū Ja’far At-Tahawi (d. 321 A.H.). It is a very accurate and precise text, considering its small size. It includes the fundamental principles of belief and its most important issues.

The commentary of the noble scholar ‘Ali Ibn Abi Al-‘Izz Al-Dimashqi Al-Hanafi (d. 792 A.H.) on this book has obtained high stature, his explanation is adequate and in an easy-to-understand language. That is because it encompasses the true creed of the Ahl as-Sunnah wa al-Jāma’ah. This book has obtained high stature in Islamic publication history. It has been the main reference book for the ‘aqidah, and it has received special attention from the scholars and leaders of Ahl as-Sunnah wa al-Jama’ah.

According to Ibn Hajar al-Asqalani, Ibn Abi al-'Izz was born on 12 Dhu al-Hijjah 1331 CE/731 AH, hailing from a family that were staunch adherents of the Hanafi school of jurisprudence. He was a disciple of Ibn Kathir, a student of Ibn Taymiyyah. He was appointed as a judge in his hometown of Damascus, later accepting a judgeship in Egypt before returning to Damascus. Al-Sakhawi mentions his teacher, Ibn Adiry, as one of al-'Izz's students.

During his latter tenure as a judge in Damascus, al-'Izz became embroiled in controversy due to his views that Allah has a direction, Hell is not eternal and his censure of Ibn Aybuk's qaṣĩdah (poem) whose contents he held to constitute disbelief. His judgeship was subsequently revoked until an individual named al-Nāṣirī raised the issue to the authorities, resulting in al-ʻIzz's position being restored. He remained in his position until his death there in 1390 CE/792 AH

Dakwah Corner Bookstore Malaysia Sdn Bhd™ (DCB™), Professional In Multi-language Islamic Materials. Alhamdulillah, Praise be to Allah, DCB™ was incorporated in 2008 as an extended representative of the well-known Dawah Corner bookstore based in The Holy city of Makkah Al Mukarramah.

DCB™ is committed to being one of the most trusted sources of Islamic books, multimedia, and publications for Muslims and non-Muslims alike in the country. This is done by maintaining an extensive inventory of high-quality products based on authentic Islamic works at a very reasonable price and in various world languages.

DCB™ is also among the top-ranking publishing house that contribute to the reading industry with many valuable, extremely sought publications.