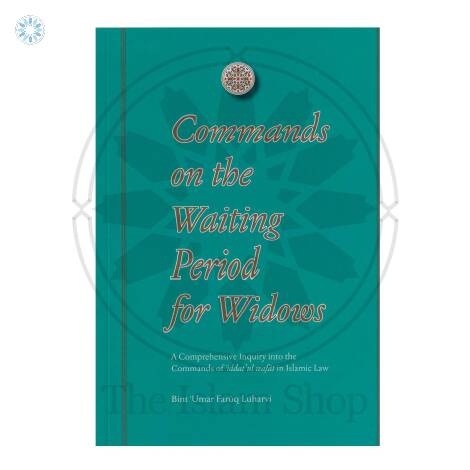 Commands On The Waiting Period For Widows

Commands On The Waiting Period For Widows

This book, Commands On The Waiting Period For Widows provides comprehensive understanding on the directives incumbent upon widows according to the Hanafi School of Law ( Fiqh Jurisprudence). Through penetrative analysis of the foundations of 'Iddat 'ul wafat, the reader is afforded an important and valuable overview of its ruling in accordance with the sharīʿah. By synthesising an extensive list of the erroneous customs vis-à-vis Iddat'ul-Wafat, the author clears up age-old misconceptions and sheds light on the true essence of this commanded obligation with the intent of imparting knowledge among the Muslim Ummah.

Shaikhul Hadeeth Mufti Umar Farooq graduated from Jaami'ah Raandair, India where he studied a standard level of religious subjects. After graduation, he moved to Jalaalabad, India for further studies and a higher learning in Islamic Jurisprudence (Fiqh). After reaching his goal, he was immediately nominated a lecturer in Jaami'ah, Raandair. After teaching for a number of years there, he was called to England.

He is currently the Imaam and Khateeb of Madina Masjid Mosque Trust, Clapton and a senior lecturer of Hadeeth (Including Saheeh al Bukhari and the prominent work of Imaam Tahaawee) at an Islamic Institute in Darul Uloom London which is based in Kent. He is also a leading authority in the Shar'ee Council at the same Institute.

He has written numerous articles in Arabic, Urdu and also Gujrati which have been published in numerous magazines in the UK and India. His proficiency and expertise are recognized in most religious subjects, but he mainly engages himself in the teaching and studying of Ahaadeeth and delivering Fataawaa.

He supervised the answers until 2004 for muftisays.com during their launch and initial setup. He guided our new Muftis on resources and classical books. Due to the distance of the location, Mufti Umar Farooq was unable to continue his supervision from late 2004 but still keeps his profile on the website for credit that is due and for maximum recognition of the most unique scholar to bless the UK, Europe and around the World.

His vast experience and deep study of Ahaadeeth keeping all the Islamic perspectives in mind has made him amongest one of the most respected and trusted scholars in the UK.

May Allah Ta'aalaa reward him highly and enable us to value his presence. Ameen.