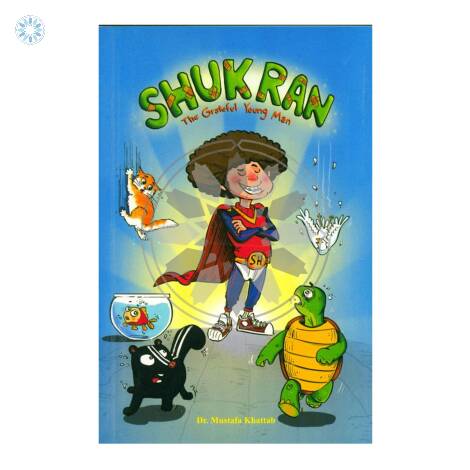 This amazing journey of a boy raised in North America is based on a mix of real-life and fictional situations. Shukran (pronounced /shook-ran/, which means 'gratitude' in Arabic) is full of innocent fun and silly rhymes with a powerful twist, highlighting universal human values. Utilizing years of experience in education, counseling, and parenting Dr. Khattab walks a young man towards gratitude. It is our hope that this story will put a smile on kids' faces and motivate them to appreciate their parents, pets, and the world at large.

Dr. Mustafa Khattab is a Canadian-Egyptian authority on interpreting the Quran. He was a member of the first team that translated the Ramadan night prayers (Tarawih) live from the Sacred Mosque in Makkah and the Prophet’s Mosque in Madinah (2002-2005). Dr. Khattab memorized the entire Quran at a young age, and later obtained a professional ijazah in the hafs style of recitation with a chain of narrators going all the way to Prophet Muhammad -Lr. He received his Ph.D., M.A., and B.A. in Islamic Studies in English with Honors from Al-Azhar University's Faculty of Languages & Translation.

He lectured on Islam at Clemson University, USA (OLLI Program, 2009-2010), held the position of Lecturer at Al-Azhar University for over a decade starting in 2003, and served as the Muslim Chaplain at Brock University and the University of Toronto (Mississauga) UTM, Canada. He is a member of the Canadian Council of Imams and a Fulbright Interfaith Scholar. He has served as an Imam in the U.S.A. and Canada since 2007, and is the translator of The Clear Quran (2015), the author of The Nation of Islam (2011), and Outfoxing Fox News (2017), and contributor to the Encyclopedia of Muslim American History (2010). His forthcoming works include Qamus-ul-Quran (The Dictionary of Quranic Vocabulary) and Shukran (an illustrated story for kids)

In 2020, The Clear Quran Series became the default translation available on quran.com. Clear Quran Series: a thematic English translation is a Canadian English interpretation of the Quran. Its international publisher is Al-Furqaan Foundation, author, Mustafa Khattab stated a mistranslation of dabbah as an early motivation to complete the project: whereas Khattab perceived a living being, translations often rendered the word animal. The translation has been officially approved by Al-Azhar and endorsed by the Canadian Council of Imams and many Muslim organizations and scholars worldwide.

Khattab eschews Early Modern English that many Western readers are familiar with from the King James Version of the Bible, and instead uses modern Canadian English to appeal to a broader audience.

FIQE, a division of Al-Furqaan Foundation was founded with a mission to educate Muslims in the U.S.A., by providing a variety of services that include publishing of books and materials on different media, providing resources to Muslims in prisons, programs for new Muslims & adult classes on Quranic Sciences.