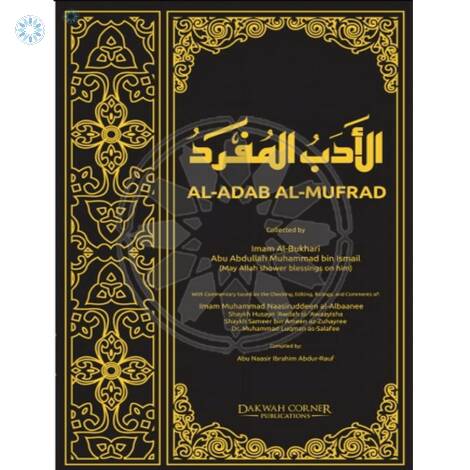 Al-Adab al-Mufrad, an anthology of 1329 hadiths, is a treasured work in Muslim history by one of its most respected scholars, Imam Bukhari.

In preparing this selection of hadiths Imam Bukhari aimed to set out a model to follow for successful relations within the Muslim community as well as interaction between Muslims and non-Muslims based on the Prophetic example, and that of Muhammad's closest companions. All of the hadiths are directly related to the standards of manners and morality Islam wants to prevail, and Muslims throughout the world have been guided by it since its preparation over a millennium ago.

Famed for the reliability and strength of his work, Imam Bukhari exclusively used hadith that do not go below the grade of "Good", or "Hasan", and since they are focused on manners and moral values, they are upheld by scholars.

What distinguishes the present work is that it includes a contemporary commentary, clearly emphasising the relevance of the Prophet's teachings in our modern and complex societies. This pioneering addition marks it out as perhaps the first English work commenting on and explaining a full anthology of hadiths.

The translator and author of the commentaries, Adil Salahi, has a long history of research in the Seerah and Hadith, and he wrote extensively on both. This work puts together the best of his writings on the Prophet's teachings in the area of morality and private and social manners.

The full name of Imam Bukhari is Abu Abdullah Muhammad ibn Ismail ibn Ibrahim Ibn Al-Mughirah ibn Bardizyah Al-Jufri Al-Bukhari. His great grandfather, Al-Mughirah, settled in Bukhara after accepting Islam. He was born on Friday, 13 Shawwal 194 AH (July 21, 810 CE) in the city of Bukhara (a city in present day Uzbekistan). His father was an Alim (Islamic Scholar) and learned from number of famous scholars including Imam Malik ibn Anas. His father died when he was infant and his mother took on the entire responsibility of bringing him up.

Dakwah Corner Bookstore Malaysia Sdn Bhd™ (DCB™), Professional In Multi-language Islamic Materials. Alhamdulillah, Praise be to Allah, DCB™ was incorporated in 2008 as an extended representative of the well-known Dawah Corner bookstore based in The Holy city of Makkah Al Mukarramah.

DCB™ is committed to be one of the most trusted sources of Islamic books, multimedia, and publications for Muslims and non-Muslims alike in the country. This is done by maintaining an extensive inventory of high quality products, based on authentic Islamic works, at a very reasonable price and various world languages.

DCB™ is also among the top ranking publishing house that contributing to reading industry with many valuable extremely sought publications.