Photo by Annie Spratt on Unsplash

The history of Moroccan cuisine is as sophisticated and diverse as its aromas and flavours. The foods which Marrakech (and Morocco) are renowned for are the culmination of centuries of trade and cultural amalgamation.

Of course, the history associated with Moroccan cuisine has also shaped the way its people eat their favourite meals, along with when and why they eat what they do. This article will provide more detailed information on its origins.

The Seeds of Moroccan Cuisine

The Moroccan food menu that the world is accustomed to began with the Berbers who were once the dominant ethnic group in the region. In fact, the Berbers inhabited the region over 2,000 years ago. Their food staples consisted of local ingredients including olives, figs, and dates to prepare lamb and poultry stews – ingredients that are still heavily used today.

Of course, the Berbers would soon be accompanied by other groups of people. Traders and conquerors from surrounding peoples including the Romans, Phoenicians, Carthaginians, and most prominently, Arabians, introduced new recipes and ingredients.

In fact, in the 7th century, the Arabs brought new food choices with them including new types of bread and other grain-based foods. They also introduced new spices such as cinnamon, ginger, saffron, cumin and caraway. In addition to these spices, the Arabs introduced the indigenous people of Morroco to sweet-and-sour cooking, which the Arabs had learned from the Persians.

Jewish influence also comprises some of the lineages of Morrocan cuisine. During the 7th and 8th centuries, Jewish people began to migrate to North Africa, being granted safe residence despite the rise of Islamisation. The Jewish people introduced the Moroccan people to various pickling and preservation techniques for fruits and vegetables.

The lost empire Ghanian empire of Ouagadougou, which ruled what now consists of modern-day Senegal, Mauritania, Burkina Faso, Gambia and most of Mali, also contributed to Moroccan culture. Ouagadougou introduced Sufism – a form of Islamic mysticism – and their rituals often included culinary practices such as the provision of free food. This includes the announcement of “Bismillah” (which means “in the name of Allah”) before the kneading of the dough to make bread.

Additional influences came from the Moors in southern Spain, who brought pastilla, which is now a very popular pie in Morocco. Of lesser influence were the French and the British, who contributed to Moroccan cuisine in more recent times.

With so much external influence, one may think that Morocco’s food culture and traditions from the Berber people were lost. However, that’s not the case at all. The land of Morocco is rich and fertile, producing various crops including oranges, melons, tomatoes, sweet and hot peppers, dates, olives, almonds, figs and more.

As for meat sources, the people of Morocco eat plenty of poultry and lamb, and add their own unique spin on these animal meats with the crops they grow. Also, Morocco is known for its seafood culture, with many of its people eating sardines, mackerel, anchovies and pilchard (the latter of which, unfortunately, is on the decline).

The arrival of the Arabs in the 7th century has significantly influenced Morocco’s culinary heritage. In fact, the Arabs are the ones who brought the famous spices from China, India and Malaysia such as cinnamon, ginger, paprika, cumin and turmeric. Influenced by the Persians, they also brought nuts and dried fruits, which allowed the sweet and sour combination, still present in tagines and dishes like bastila. At that time, the existence of a wealthy and grand Moroccan court – through the rulers of the main existent dynasties (Almoravides, Almohades, Merinides, Saadians) – was crucial to the elaboration of the Moroccan cuisine in order to please the ambition of the courts in the four imperial cities (Fes, Meknes, Rabat and Marrakech).

Due to Morocco’s geographical location, the Moors, (Muslim inhabitants mainly based in the Iberian Peninsula in the 8th century) from Spain had a strong impact on Moroccan cuisine. They are responsible for the increased production and use of olives and olive oil and the settlement of citrus gardens and fruit-bearing trees. The Moors population was followed by the Jewish Moors who introduced pickling and preserving fruit and vegetable techniques.

The Ottoman Turk presence in the geographical region introduced grills and barbecues (kebab) to Moroccan cuisine.

The French colonized Morocco in 1912 and brought with them a culture of cafés, wine, ice cream and patisserie.

As you can see Morocco’s geographical position and close historical relationship with other populations have made Moroccan cuisine a unique melting pot of many cultures and traditions. The historical influences, the ambition of the courts in the imperial cities but also the natural inland resources have allowed Moroccan cuisine to become a delightful culinary experience.

The Modern Menu & Practices of Marrakech and Morocco

With so many nations and peoples contributing to Morocco’s culinary palette, it comes as no surprise that the country is renowned for its diverse menu. Many of Morocco’s dishes are known to offer a burst of contrasting flavours and textures, most notably sweet and crunchy. Additionally, there are specific ways the Moroccan people will eat these dishes, elevating ordinary meals into rich sensory experiences.

Before our adventure as a family of four, we were told of what a beautiful country Morroco is and that we would definitely enjoy our time there with the kids. However, the comments also seemed to always mention how bland and boring the food was! One colleague even suggested that I take spices and a bottle of spicy hot sauce with me to enjoy the food! Sceptical of the comments we decided to ditch the hot sauce and booked a Morrocan food tour as we truly wanted to experience the real rich Morrocan food.

On the day of the tour, we arranged to meet with our guide, Brother Sufiyan by the Jama El Finna Square Post office but soon got lost in the busy afternoon of the square. However, with a phone at hand, Brother Sufiyan collected us from the point where we were lost and we soon started our tour.

Brother Sufiyan informed us that the food in the Jama El finna Square is tasteless and to avoid the food in the Milla Square and the most delicious food could be found in the small humble shops cooked by the locals. He introduced us to the Jama El Finna square with a brief history of it as we walked towards the souq to our first destination stop.

It was a small narrow restaurant with tables crammed inside that we would otherwise not have noticed in the busy souq. It was here that we had our first taste of Harira Soup and Msemen. The soup we tasted was rich in an aromatic tomato base containing chickpeas and various other lentils. It was seasoned with ginger, pepper, cinnamon and lots of fresh herbs. It is especially popular in Ramadan when it’s served to break the fast at iftar. Moroccan pancakes are sometimes called rghaif or more popularly msemen. They’re a popular breakfast treat (served with cheese or honey) or tea-time treat not only in Morocco but also in Tunisia and Algeria. If you haven’t tried one, it’s time you do! We called it the Morrocan Paratha as it reminded us of parathas back In India. It was very crispy and flaky and included onions and tomatoes with various spices all rolled up inside. Although easily bought at bakeries or as street food, many Moroccans prefer to make msemen at home. That way the texture, flavour, size and quality can all be controlled. 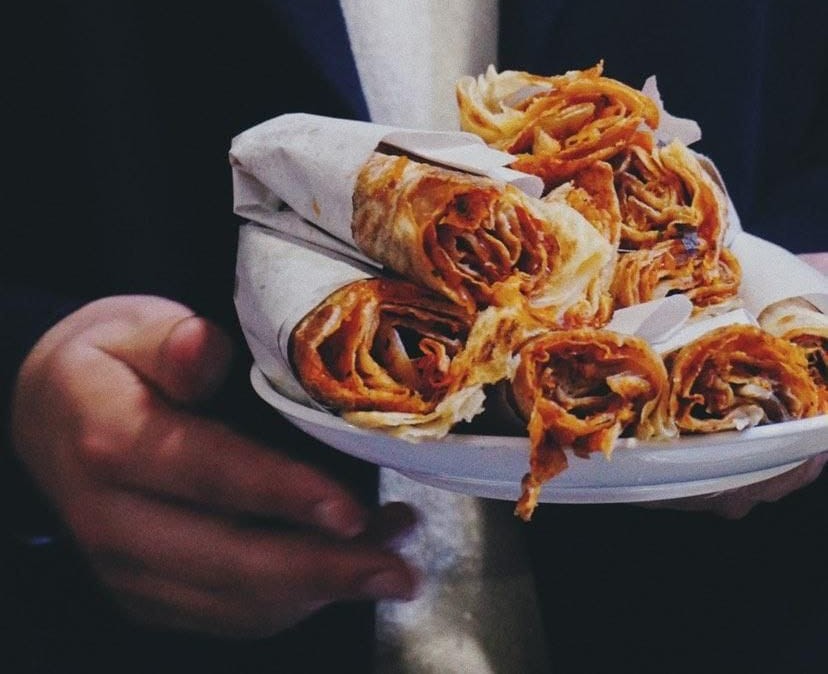 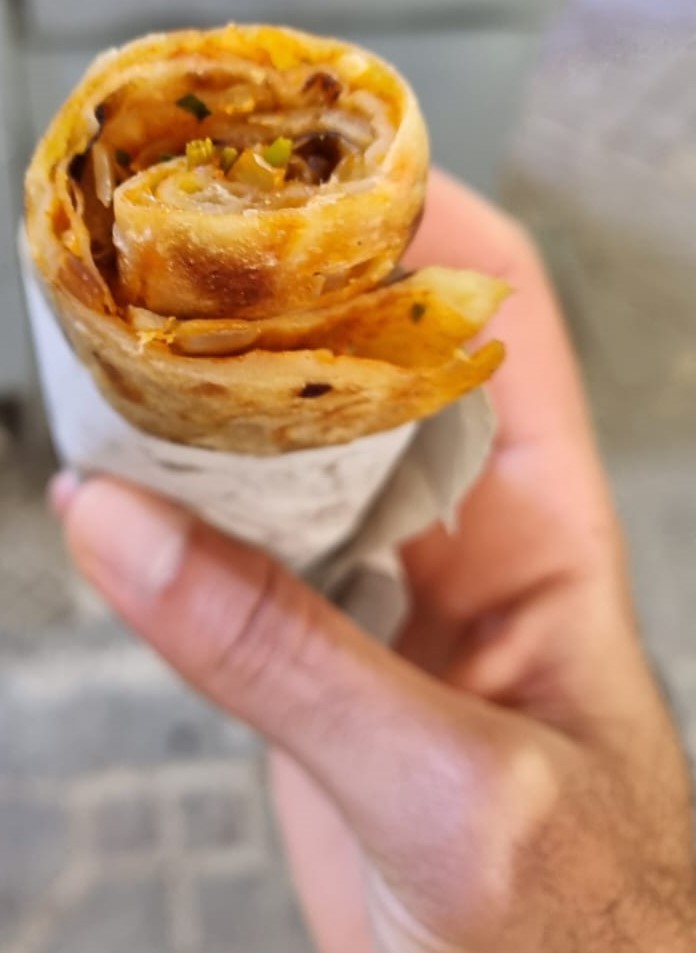 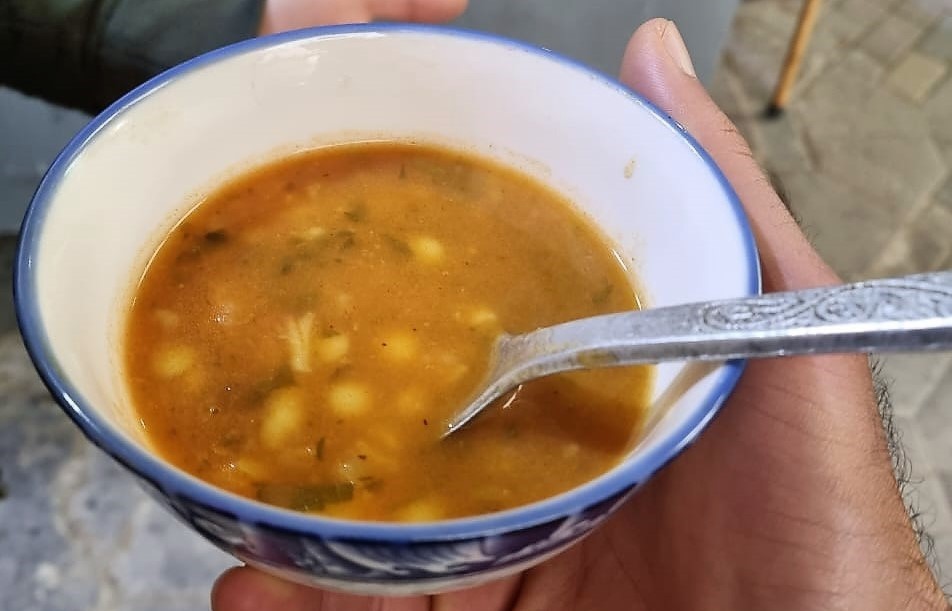 Our second stop was the Lamb Sardines Kefta. We would not have thought to try lamb sardines Kefta in England but gave it a try and were surprised at how delicious they were! They were served with a chilli sauce, salad and bread with which we made little sandwiches. You could not really smell the Sardines nor waste their a strong taste of them. Brother Sufiyaan told us that the owner of the restaurant would only open if he was able to source fresh Sardines that day. 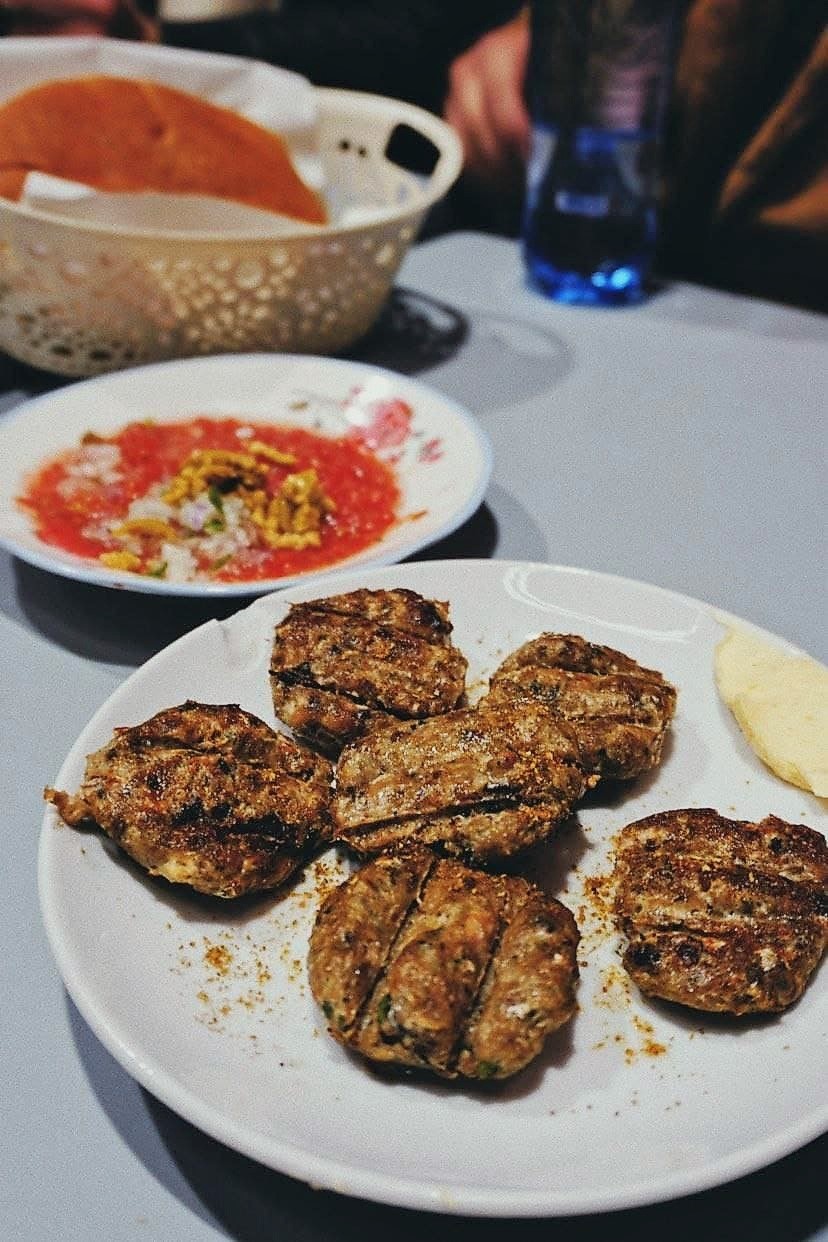 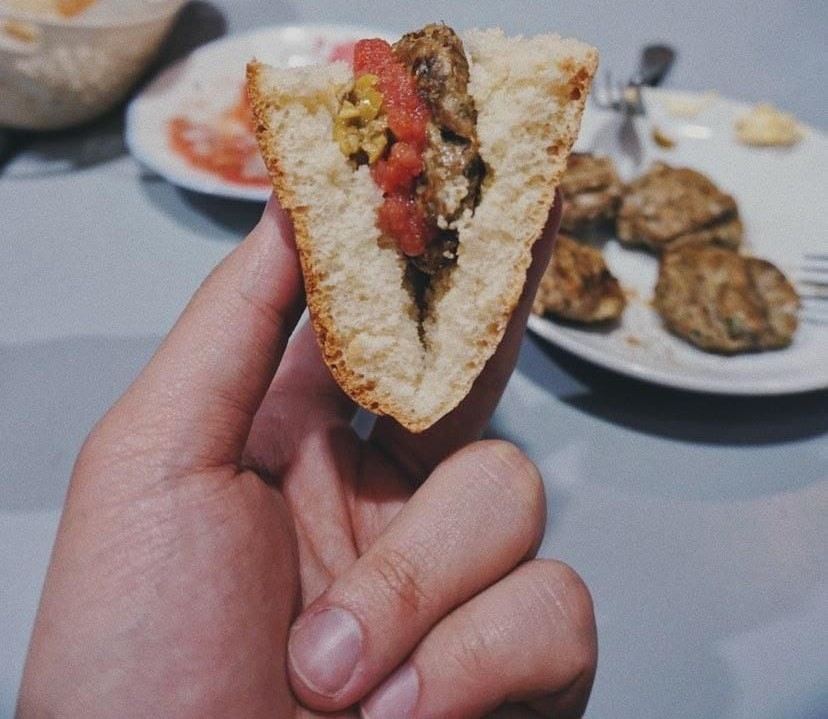 Our third stop was the Moroccan Donught or also known as Sfenj is a fritter-like Moroccan doughnut made from a sticky, unsweetened leavened dough. Once it has risen, handfuls of dough are shaped into rings and deep-fried until golden and crispy with a chewy, fluffy interior. You can dust it with sugar, dip in Honey if you like, or simply eat it as it is. They can be served for breakfast or at tea time; Moroccan mint tea is the typical beverage of choice to enjoy with the doughnuts. 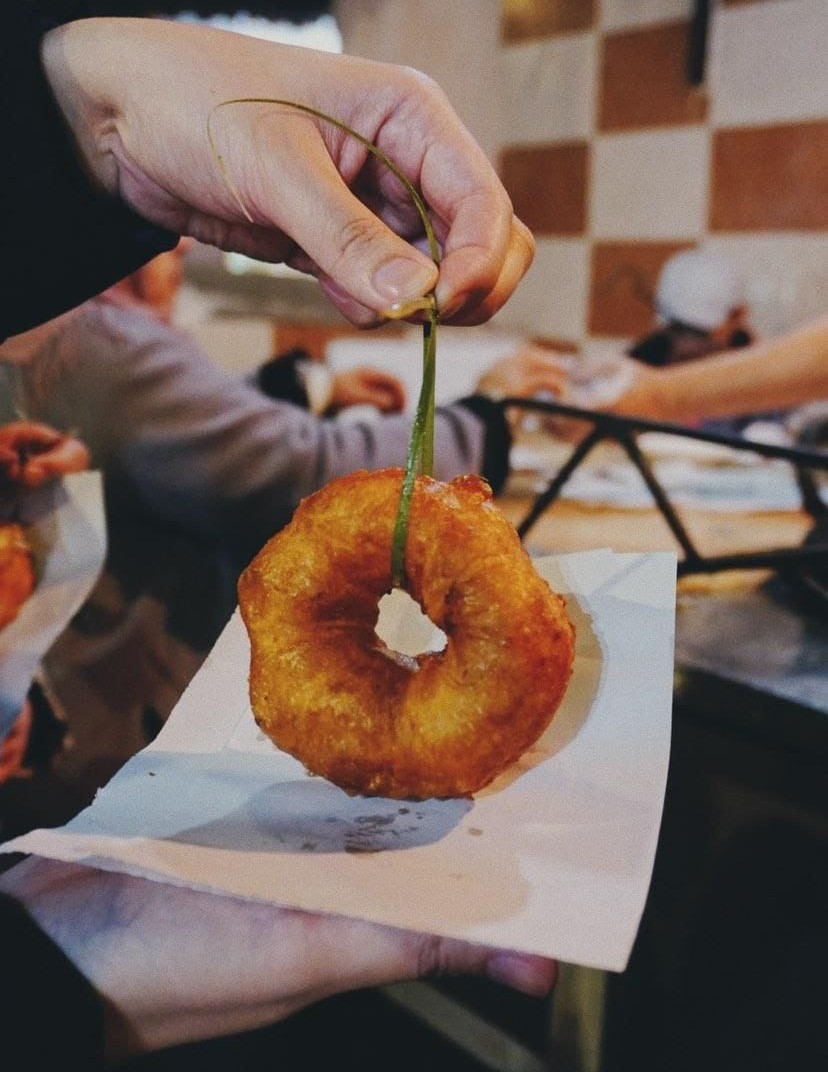 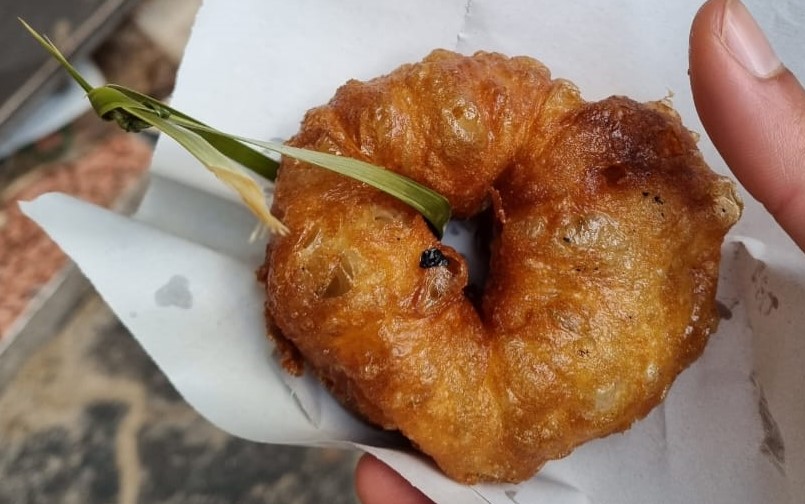 Our fourth stop was Moroccan Loubia or stewed white beans which is a classic dish much loved by most Moroccans. It is a widely known dish that you can find in any Moroccan home or restaurant, especially on the warmest days. The dish was flavorful, and delicious served with a bread roll. It was vegetarian, easy to eat, full of flavours and generously seasoned with Moroccan spices that will keep a memorable moment in our minds. The traditional Moroccan way to make loubia is to soak it overnight, and then to cook it using a pressure cooker. This tool is a must in every Moroccan kitchen. This is an efficient way to get perfectly cooked beans. 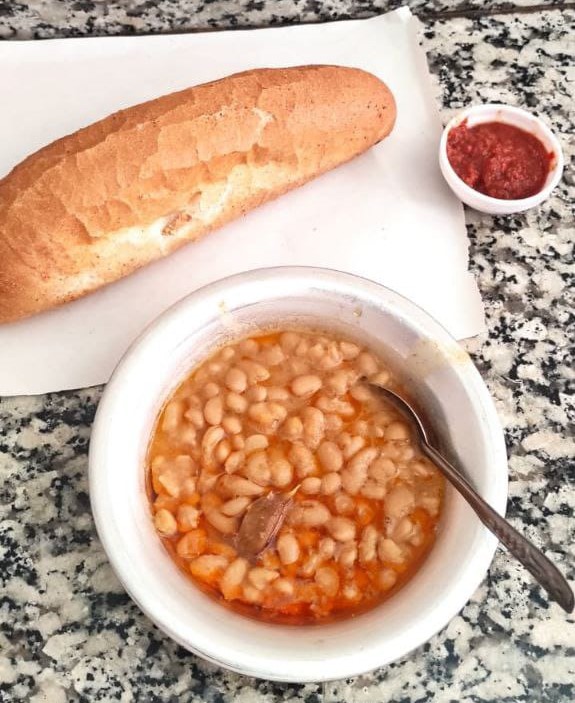 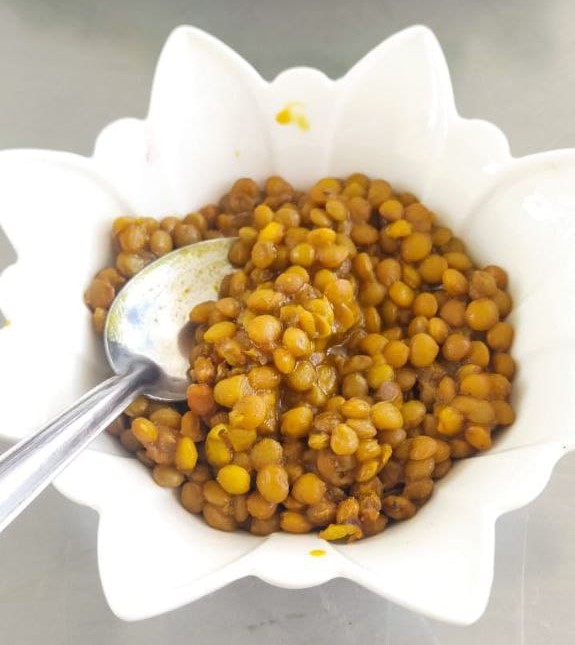 At the next stop, we declined the Snail Broth as it was not really appealing to us and according to the Hanafi Madhab, it is not allowed.

Moroccan Pastry was the sixth stop with the amazing varieties of Morrocan Biscuits. As we were so full by this point we got the biscuits packed to take out and enjoy with a nice cup of tea for later.

Our last and final stop was dinner at a restaurant hidden in the corner of the sou. Here we had lamb Tanjia with bread and sides and the kids had fresh potato chips. For dessert, we had the traditional Morrocan yoghurt. It was sweet cool and light and the perfect thing to finish the evening off. 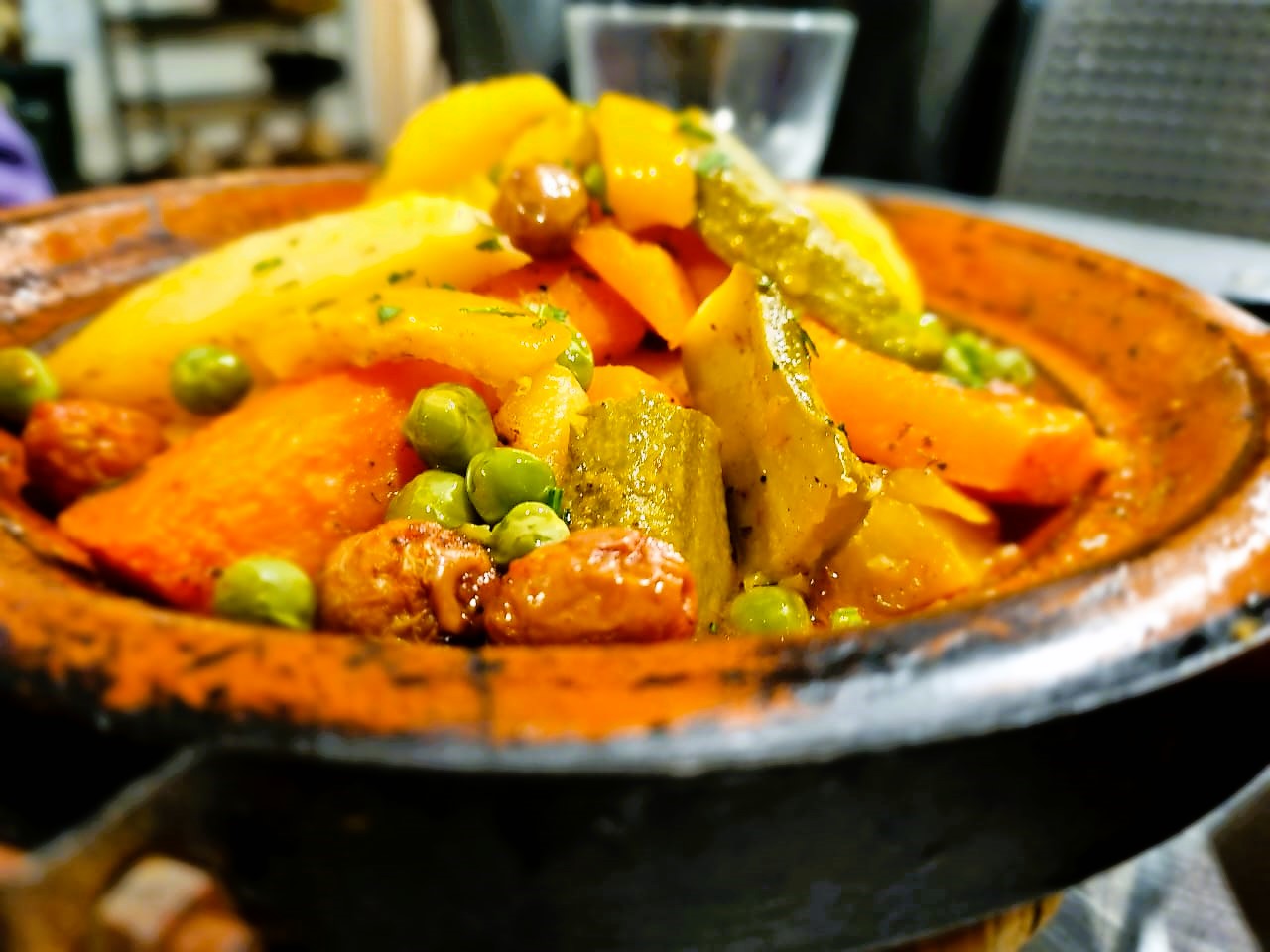 The history of Moroccan cuisine is as sophisticated and diverse as its aromas and flavours. The foods which Marrakech (and Morocco) are renowned for are the culmination of centuries of trade and cultural amalgamation. Of course, the history associated with Moroccan cuisine has also shaped the way its people eat their favourite meals, along with when and why they eat what they do. This article will provide more detailed information on its origins.