“Built upon the order of Ottoman ruler Sultan Abdulhamid II, the Hejaz Railway provided a modern means to transport pilgrims to Mecca and Medina by replacing old camel caravans as well as served to strengthen relations in the Islamic world.” (Ekrem Buğra Ekinci)

Ottoman Sultan Abdülhamid II also known as Sultan Abdulhamid Han or Caliph Abdülhamid was born in Ottoman Istanbul on September 21, 1842 as a Shahzade (son of the sultan) to Sultan Abdulmejid I and Tirimüjgan Kadın. Sultan Abdülhamid spent his childhood and youth through the Tanzimat (so-called reformation era) of the Ottoman Empire. He ascended to the throne on the 31st of August, 1876 after the deposition of his brother Murad V.

In addition to being of the greatest Sultans and Caliphs of the Ottoman Empire, he is also now commonly known as the “last true Ottoman sultan” whereby it is argued that he was the last Ottoman sultan and caliph to exercise any real authority over the Ottoman state.

Abdülhamid was an intelligent man and knew how to play the “game of politics” so much so that he became widely known for his political intelligence by both his contemporaries and counterparts. For example, the former German Chancellor Otto Von Bismarck is reported to have said the following:

Sultan Abdulhamid’s reign was arguably the most difficult and tumultuous era in the history of the Ottoman Caliphate and he is credited with lengthening the Ottoman Empire’s reign an extra 30+ years.

Moreover, nationalism within the different territories of the Ottomans was being stoked up by the various colonial powers to strategically weaken the Ottomans (a plan that ultimately succeeded). One such colonial power – and arguably the most effective colonial power in deposing the Ottomans – were the British who were pivotal in stoking up Arab nationalism through the efforts of people like the infamous Lawrence of Arabia who played a part in trying to make sure the Hejaz railway did not ultimately serve its intended purpose through bombing parts of the railway.

Sultan Abdulhamid II adopted a policy of pan-Islamism in order to oppose Western intervention in Ottoman affairs and the sense of unity he sought to create was embodied by the Hejaz Railway. 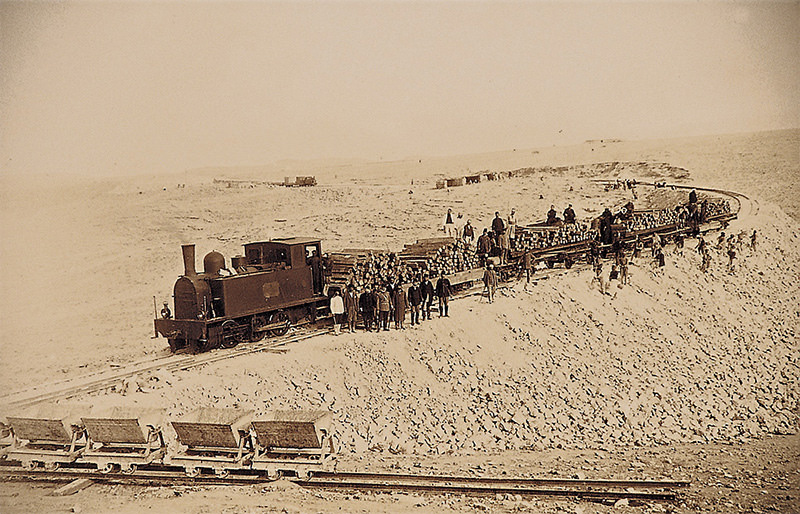 The Hejaz/Hedjaz/Hijaz railway would begin in Istanbul travelling through modern-day Syria, Palestine and much of the Arabian desert and end in Makkah. The railway was an aspiration of the Ottoman Sultan Abdul Hamid II for two reasons:

(1) Making the travelling for Hajj easy: The aim was to better connect the Holy sites with Istanbul and to also make the pilgrimage easier. The railway would drastically alter the mode of transport for pilgrims going to Hajj (which was previously done via camels or by foot) thereby reducing the length of time (according to experts then, down to 5 days) to travel to Makkah and Madinah, and

(2) Strengthen the Islamic world and the Ottoman Caliphate: Sultan Abdul Hamid also recognised the socio-political benefits of the railway as it would strengthen the ties between the different Islamic regions all the way from Istanbul to Arabia. Its necessity was deemed even more significant due to the concept of Ummah (Muslim nation) being challenged as a result of nationalism amongst the various Islamic regions along with the colonisation and occupation of Muslim lands.

It was designed to strengthen the empire militarily and their control over the Arabian peninsula and enable soldiers to reach the Holy Sanctuaries of Makkah and Madinah in no time if it were to come under attack.

Support From The Muslim World

Muslims all over sent their own personal wealth and savings in order to support this venture of Caliph Abdulhamid including those very Muslims in the capital city (payitaht) of Istanbul as well as Muslims from the Balkan region like Bosnia.

Muslims living outside the Ottoman territory made large donations through Ottoman consulates. From Morocco, to Egypt, India, South Africa and Kazan, which were occupied and colonised by Europe, all over the Islamic world raced to contribute to this endeavour. This campaign of donating towards the railway campaign, amidst the colonisation of various Muslim lands, turned it into a matchless project in terms of Islamic unity and loyalty to the caliphate; even non-Muslims living in the Ottoman Empire contributed towards the railway project.

The Relative Success of the Hejaz Railway

The Hejaz Railway (also known in Turkish as the Hicaz Demiryolu) was a narrow-gauge railway (smaller than the usual railways at the time) and as mentioned prior was intended to run from Damascus to Makkah, through the Hejaz region of Arabia (modern day Saudi Arabia) with a branch line to Haifa (in Palestine) on the Mediterranean Sea. It was a part of the overall Ottoman railway network and the original goal was to extend the line from the Haydarpaşa Terminal in Istanbul beyond Damascus to the holy city of Makkah thereby connecting Istanbul to Madinah, Makkah and Yemen through Damascus.

It was launched in Damascus on September 1, 1900 and four years later, 460 kilometers of the railway was finished and reached to the city of Ma’an in modern-day Jordan. By September 1, 1908 (eight years later), it managed to reach the city of the Prophet Muhammad ﷺ (peace and blessings of Allah be upon him): Madinah. Sadly, the Ḥejaz rail network was never completed and it did not reach Makkah due to the outbreak of World War One. 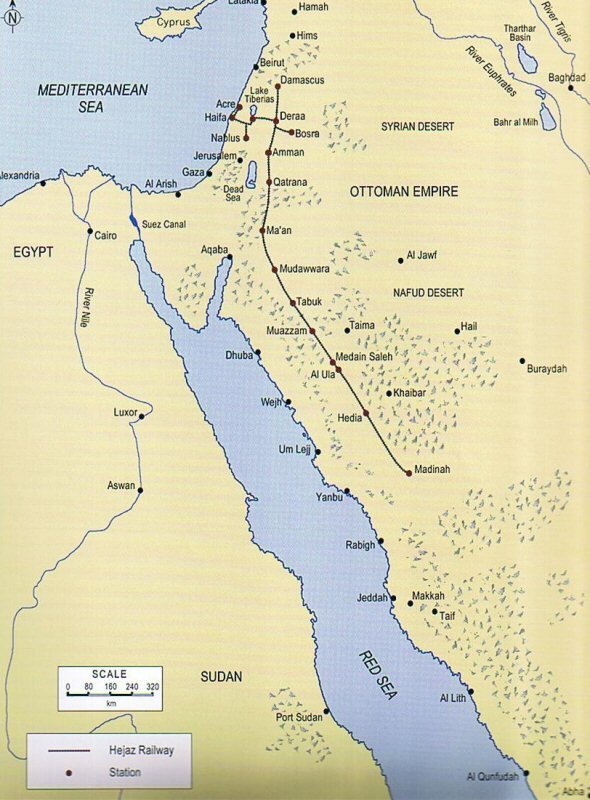 Attacks Against The Railway

From the offset, the railway came under frequent attacks by various Arab tribes and Bedouins who viewed the railway as a threat to their way of life, business and supposed sovereignty. This included the likes of Faisal Bin Hussein (later British-allied King of Iraq).

The railway also came under attack by the British through the assistance of the aforementioned Lawrence of Arabia (AKA strategic British officer T.E. Lawrence) and the various Arabs who allied with the British during the Arab revolt against the Ottomans. They bombed parts of the Hejaz railway network to stop Ottoman troops from sending reinforcements; this was re-enacted in the movie “Lawrence of Arabia.”

The Abandoning of the Hejaz Railway & The Fall of Abdulhamid II

As mentioned prior, the Hejaz Railway was never completed due to the outbreak of World War 1 (WW1).

Built upon the order of Ottoman ruler Sultan Abdulhamid II, the Hejaz Railway provided a modern means to transport pilgrims to Mecca and Medina by replacing old camel caravans as well as served to strengthen relations in the Islamic world.”