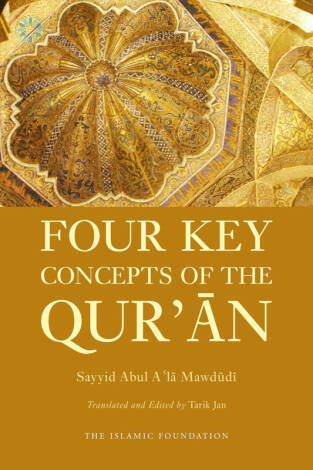 Four Key Concepts of the Quran

Four Key Concepts of the Quran

Ilah, Rabb, Deen and 'Ibadah, are four terms basic to the whole teaching of the Qur'an. Throughout its pages, it stresses again and again that Allah Almighty is the Rabb and the Ilah;that there is no ilah but He, nor is there any other rabb, nor does He share with anyone else the qualities and attributes implied by these terms. He, and He alone should therefore be accepted as one's Ilah and Rabb, and no-one else should in the least be believed to possess the attributes which these words imply. It also demands that we should give our ibadah to Him and Him alone, and not to anyone else, and make our deen exclusive to Him and reject all other deens! And to every Messenger We ordained before you (O Prophet), the message which We gave for himself and for others) was none other than that "There is no Ilah but Myself, and therefore give your 'ibadah to Me alone.
This book elucidates these basic Qur'anic concepts ilah, Rabb, Ibadah and Din in order to bring out fully the Islamic way of life, as distinct from other perspectives. This elaboration goes a long way in developing a sound understanding of the Qur'an. It also explains the man-God relationship in Islam, guiding Muslims on how to lead their lives in total surrender to Allah.

Abul A'la Mawdudi (1903-1979) was a leading Muslim intellectual and a chief architect of the Islamic revival in the twentieth century. In 1941 he founded Jama'at-i-Islami, a political party in Pakistan, which he led until 1972. He authored more than a hundred works on Islam, both popular and scholarly, and his writings have been translated into some forty languages.