Photo by Matt Hoffman on Unsplash

Honey is nature’s sweetest of treats. However, besides just tasting great on toast, honey has some health benefits, as well as non-edible applications. Though honey is mostly sugar, it contains much more complex forms of the stuff than white sugar, meaning it takes your body longer to break it down, so you have energy for longer and the caloric content goes down. Honey also contains antioxidants and minerals like iron, calcium, and magnesium (though in fairly small amounts). Honey is also famously antibacterial, it’ll keep forever. Therefore, if you buy it in its pure form; you won’t be eating any preservatives, like with sugar.

However, before you run out and grab a teddy-bear shaped bottle of the sweet stuff, we should talk about the many types and varieties of honey. Turns out, it’s a complicated industry, and you might not always ‘bee’ getting (see what I did there?) the pure, unadulterated beehive gold you think you are. Keep reading and get yourself some sweet honey education. 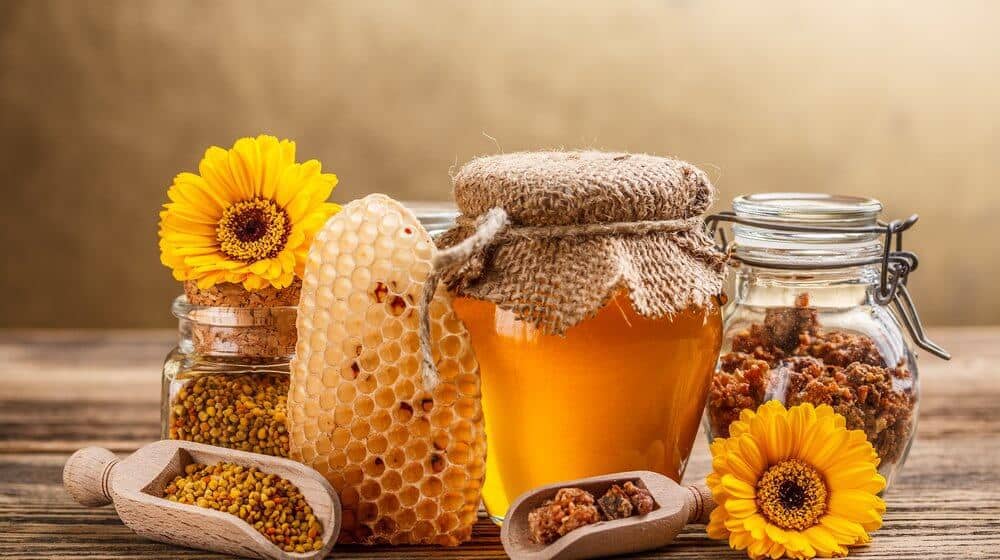 Honey is extremely variable and comes in many forms, from many places. There are over 300 different types of honey in just the United States alone. They range from clover, to orange blossom, to buckwheat, to blueberry, to infinity and beyond. Each flower produces its own distinct colour, fragrance, and flavour. In general, the lighter the colour the more mild the taste and aroma. However, honey doesn’t just vary in terms of taste, but in form as well. Depending on the form you prefer, your honey eating experience can vary quite a bit. Here are the most common forms of honey:

•Comb Honey – this is as straight up as honey gets –just as the bees intended, complete with edible honeycomb. Those interested in the many health benefits that honey provides often prefer it in this form, as none of the good stuff has been filtered out during processing.

•Cut Comb Honey – this is liquid honey that has chunks of the honeycomb in the jar.

•Liquid Honey – this is the form most familiar to us, as it is the easiest to cook and bake with. Think Winnie the Pooh with his hand (paw?) in a jar of the sweet stuff and you know what I’m talking about.

•Crystallized Honey – sometimes the glucose in honey spontaneously crystallizes, forming a more grainy texture. Honey can be purchased in this form, but if it happens to your liquid honey accidentally, you can always just heat it up to return it to its pure liquid form. 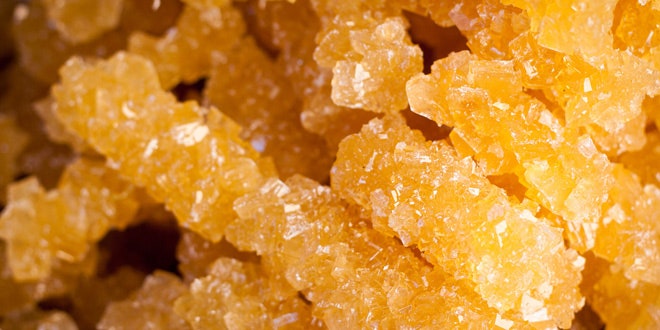 •Whipped or Creamed Honey – this is crystallized honey that has been whipped to crush the large grains of crystallized honey into a smooth, creamy texture. In this form, the honey spreads like butter, and in many countries is the preferred form of the sweet stuff. 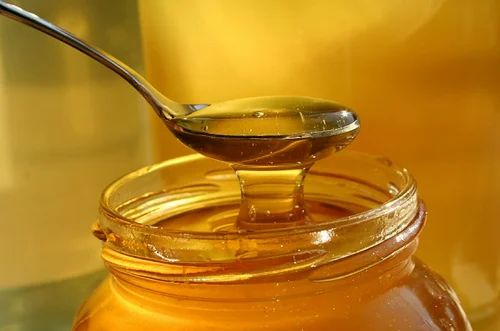 •Varietal or Monofloral Honey – this is honey from a single variety of flower, which means the flavour will be much more distinct depending on the blossom it comes from. So, now you think you just about got this honey thing figured out, right? Well, think again! It is in the processing and packaging phase where honey really gets complicated. Turns out in the US there is very little regulation on honey. Like, basically none. This means a jar can say “Grade A 100% Arizona Clover Honey” and literally all of those words can mean nothing –it might not come from Arizona, might not be from clover, might not even be 100% honey (although we like to imagine bee keepers as extremely honest fellows with maybe just an unnatural love for the winged critters). Honey can actually be processed in many different ways, and often times the processing classification is much more informative than the grading system or label on the jar.

•Raw Honey – this is pure, unprocessed honey. It comes either straight out of the hive in comb form, or has been extracted by straining or filtering (not using heat pasteurization) to remove any large impurities. This honey still contains pollen and all the medicinal properties for which honey is known. If you buy it in liquid form, it will be cloudy and tend to crystallize faster than processed honey.

•Ultra filtered Honey – this honey has been processed with a very fine filter under high pressure. This process removes all impurities as well as pollen grains. It is clear in appearance and has a longer shelf life before it starts to crystallize.

•Pasteurized Honey – this is honey that has been processed with heat to help extend shelf life. This process removes all pollen as well as enzymes, antioxidants and other awesome stuff that naturally occurs in honey. Most supermarket honey has gone through this process.

So, as you can see, the honey you think you’re buying from your local supermarket might really just be a honey flavoured sugar replacement, void of any real health benefits, and possibly full of added icky stuff like corn syrup. If you’re looking for real, unadulterated honeys from a reputable source, your best bet is to buy from local farmers who can attest to where their honey is sourced and how it’s packaged and processed.

So now that you’re up to speed with your honey learnin’, let me throw one more awesome tidbit your way –Manuka honey. Now, honey has also been used medicinally for centuries, from soothing sore throats, to helping with insomnia, to treating wounds and burns. Not to mention, it’s great for your hair and skin (some people take that a little overboard, it seems). However, manuka honey is off the charts as far as medicinal benefits. A monofloral honey made from the manuka tree, this honey is sold as a popular alternative medicine and has been used to treat burns, ulcers, even periodontal disease. See, while all honey contains varying amounts of hydrogen peroxide (crazy, right? I had no idea) which accounts for it’s antibacterial properties, manuka honey also contains a substance called Methylglyoxal (or mg) which is apparently like the Chuck Norris of germ fighting. Different batches of manuka honey contain differing levels of mg, meaning some jars of the stuff can have up to 100 times more potency than others (they even have a special numbering system for it for determining the strength). So, if you’re looking for some real powerful medicinal honey, be sure to buy a jar of “active” manuka honey, the higher the rating the better apparently.

Hope that helped you navigate your way through the vast world that is honey and if you want to weigh in on any farmer’s markets or local stores that sell the good stuff, straight from the bees, let us know in the comments below.

Raw unfiltered honey is a very different product from the filtered honey sold in supermarkets. Educate yourself to know the differences and to know what you're really getting.

Not all honey is created equal. The honey that you buy in the supermarket is not the same as raw unfiltered honey. In fact, an estimated 76 percent of honey sold in supermarkets is fake. Most of it has been modified and lacks the nutrients that make real, pure honey so healthy. Here are some facts you should know about honey before you go shopping.

1. Raw unfiltered honey contains bee pollen, which has long been considered one of nature’s most nourishing foods. Bee pollen is packed with protein, and has been used in Chinese medicine to improve unbalanced nutrition, vitality, longevity, and energy. It is also used for weight control, beauty, anti-aging, allergies, and overall health.

2. When honey is ultra-filtered or pasteurized, the bee pollen is removed and its many benefits are lost. Companies originally started filtering because it extended the product’s shelf life, but left it devoid of nutrition in the process.

3. Many companies add High Fructose Corn Syrup (HFCS) to honey, made from genetically modified corn. According to Organics.org, “HFCS has been linked to diabetes, obesity, hypertension and liver damage, and leads to plaque buildup and narrowing of blood vessels.”

4. Many supermarket honeys are mass-produced and imported from China and India (sometimes blended). Imported honeys have a history of contamination, which results in mass recalls when caught. In 2003 Smuckers recalled over 12,000 cases honey and Sara Lee recalled products which had used 100,000 pounds of that same honey; it had come from China and was contaminated with chloramphenicol (used in eye drops with linked side effect of leukaemia).

5. It’s almost impossible to find organic honey. Considering that bees fly a couple miles away from their hive, there are far too many non-organic farmers and neighborhoods to be able to guarantee whether a particular honey is pesticide-free. As Ready Nutrition blogger Tess Pennington points out, “A hive would have to be in the center of a minimum of 16 square miles of organic plants” in order to be truly organic. Also, there are no USDA standards for organic honey; it’s pretty much an arbitrary label.

6. Raw unfiltered honey keeps well for long periods of time. Tess Pennington (quoted above) buys two 20-pound pails each year and only one pail has ever crystallized, a year later.

The best place to shop for honey is locally. That way you know exactly where the honey comes from, and you can ask the beekeeper about which kinds of flowers the bees forage on, whether they use additives, if the honey has been filtered, etc. By supporting local business, you’ll get a higher quality product.

Honey has long been praised for its health properties and is often touted as the healthy alternative to sugar. But does it deserve such a profile? And which products taste best? Muslims are making a (ahem) beeline for honey. We consume 400 million pounds of the sweet stuff each year, according to the National Honey Board. And with the popularity of the natural sweetener soaring, not only are farmers' markets full of fancy flavors, grocery stores are following suit. But the selection can be overwhelming—are certain types healthier or tastier than others? We hit the hive to find out.