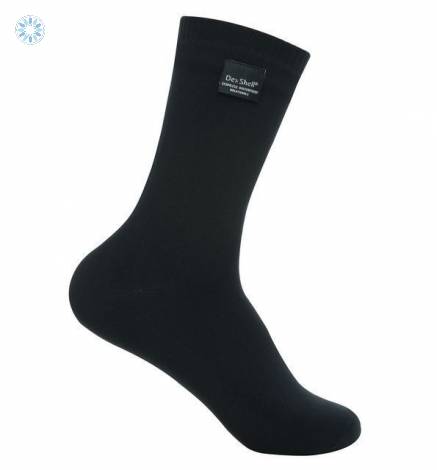 Free Delivery on this product.

DexShell Wudhu Socks are ideal for daily ablutions. They are 100% waterproof, highly breathable allowing sweat and moisture out, and durable allowing the wearer to walk long distances without tearing or holes appearing. The socks are comfortable for use within both regular sized shoes and boots. A perfect replacement for conventional leather socks.

Wiping Over the Socks

What is the meaning of khuffayn (leather socks) and jawarab (socks)?

All praise is due to Allah, and I invoke peace and blessings upon our Prophet Muhammad, and upon all of his Companions.

What is the ruling of wiping on the khuffayn and jawarab, and what is the evidence for that from the Book and Sunnah?

The wiping is a sunnah which has come to us from the Messenger sallallahu 'alayhi wa sallam, and it is better for the one wearing them to wipe over them, rather than taking them off to wash his feet.

The evidence for this is the hadith of Al-Mughirah bin Shu'bah radiallahu 'anhu who said that the Prophet sallallahu 'alayhi wa sallam made wudhu. Al-Mughirah said, "I moved to remove his khuffayn and he said,'Leave them, for indeed my feet were in a state of purity when I wore them.' So he wiped over them."

The legislation of wiping over the khuffayn is established in the Book of Allah and the Sunnah of Messenger of Allah sallallahu 'alayhi wa sallam. As for it's legislation in the Book, then it lies in the verse, "O you who believe, when you stand for prayer, wash you faces and hands up to the elbows, and wipe your heads and feet up to the ankles."

There are two correct ways of reciting the saying of Allah (wa arjulikum) 'and your feet' having reached us from the Messenger of Allah sallallahu 'alayhi wa sallam:

"From those that are mutawatir is the hadith 'the one who lies ... ',
and 'the one who builds a house for the sake of Allah, and hopes for the reward',
and the Sight, the Intercession and the Pond,
and the wiping over the socks, and ... "

So this is the evidence from the Book of Allah, and the sunnah of His Messenger sallallahu 'alayhi wa sallam.