A surprising and unconventional mosque hidden in the subsoil of Istanbul.

Hidden among the alleyways of the Karaköy harbor there is an amazing Ottoman mosque that, in stark contrast to the great height of most Islamic temples in Istanbul, is situated sunken into the earth. For this reason it was dubbed the “Underground Mosque,” or “Yeralti Camii” in Turkish.

The unusual mosque has a storied history. It’s believed that back when the Galata neighborhood was a Genoese settlement, the site was a Byzantine fort. The basement of the fort supposedly held the enormous chain that protected the Byzantine fleet from Turkish attacks by blocking ships from entering the Golden Horn waterway into the city.

The Yer Alti Mosque (or “underground Mosque is said to have been the site of a temple during the reign of Emperor Tiberius II. According to another story, the Arab army which attempted to conquer Constantinople in 714, stayed in the area for 7 years and interred their dead here. When the Arab armies returned to Damascus. They left important items belonging to their soldiers in this vault and closed off the entrance with lead. For this reason the mosque is also known as the Mosque of the Leaden Vault (Turkish; Kursunlu Mahz`en Camii.

After the Ottoman conquest, the subterranean site was used for ammunition storage until, in 1640, a religious leader of the Nakşibendi sect discovered the bodies of two Arab martyrs inside. It’s believed the soldiers participated in the failed Arab siege of Constantinople in the 7th century. It is said the Arab army interred their dead here after the attempted siege, along with valuable items locked in a vault sealed with lead. You can see the graves of the martyrs situated near of the back entrance of the mosque today, and off to the side is a gated room bearing two side-by-side tombs bathed in green light where the bodies supposedly rest.

The subterranean space was eventually converted into a mosque under the auspices of Grand Vizier Bahir Mustafa Paşa in 1757. The building, which for a long time even lacked a minaret, has two entrances at street level that allow access to the site below. When visiting this unusual mosque you seem to move between the shadows as a result of the near absence of natural light. In summer it is not strange to find people napping inside.

Thee Structure was converted to a mosque in 1732 by Bahir Mustafa Pasa who served as the Ottoman (Othmani) Grand Vizier on a number of occasions.

In the reign of Mahmud I (r. 1730-1754), it was by the prophecy of a Nakshibendi sheikh from Damascus that the relics of three martyrs from the siege were discovered by the wall of the Magazine in leaded coffins, to further elevate the Islamic connotation of the site -and bring a new reading on the term “leaded”. It was said that the relics were found buried on the side of a wall in a chamber the gate of which was “leaded” by the Umayyads during the siege… There were three coffins within the mosque, one of them being a separate tomb and two others within the Hall behind the rails. (Erkal, “The Corner of the Horn,” 215-6)

The footnote at the end of Erkal’s passage reads:

The relics are said to be of Vehb bin Huseyre (inside the rails, who joined the second Umayyad siege); Amr bin As who is the conqurer of Egypt and who was dead at the time of Umayyad sieges but is believed to visit his tomb within the mosque; Süfyan bin Uyeyne, resting in the Tomb was born in the 8th century and died in 814. The tomb has been constructed and restored several times. (Erkal, “The Corner of the Horn,” 216, fn. 105) 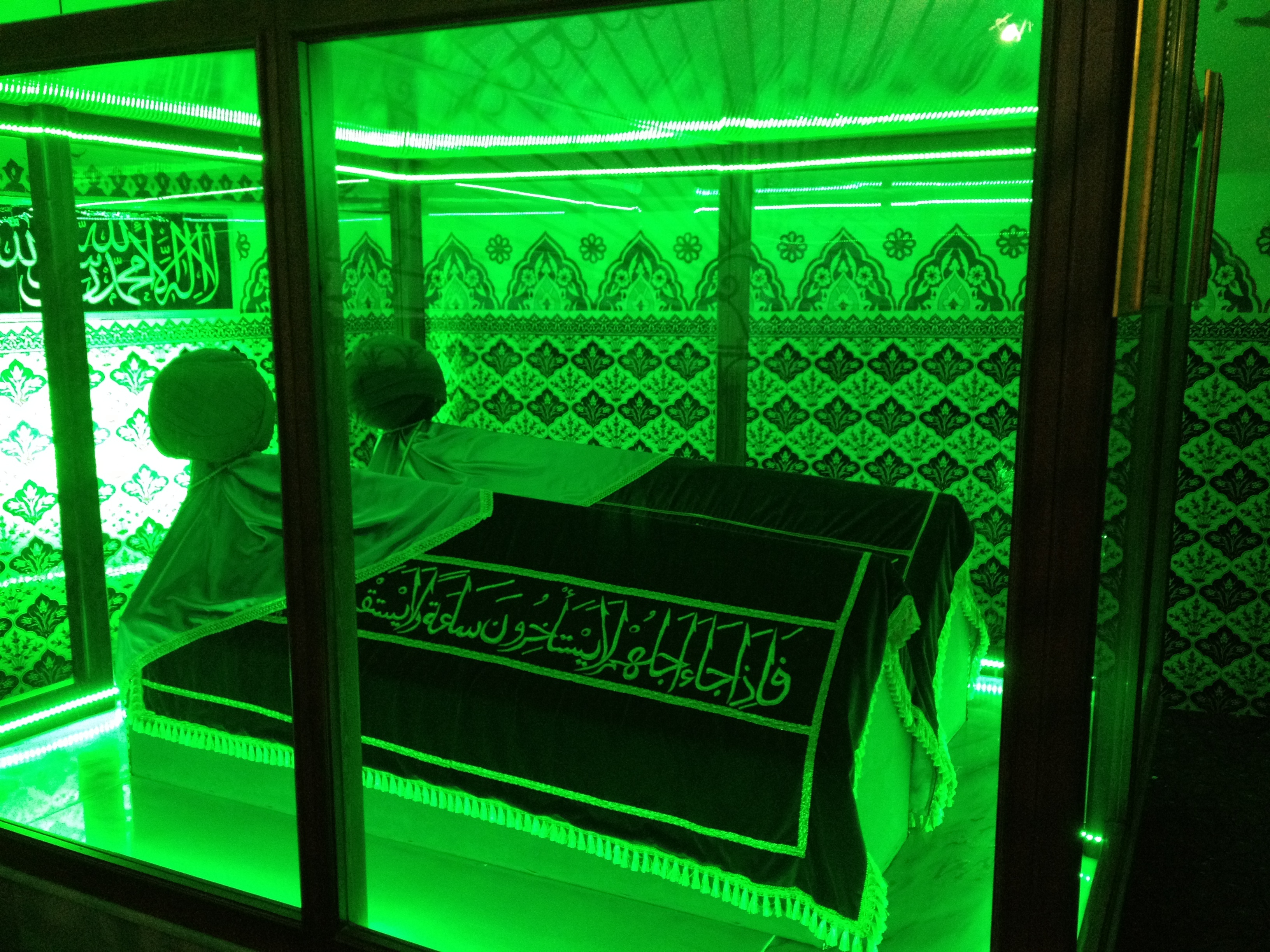 The tombs of Wahb and ‘Amr ibn al-'As

Near the back entrance of Underground Mosque and off to the side is a gated room bearing two side-by-side tombs bathed in green light. Supposedly therein lie ʿAmr b. al-‘Āṣ (Amr bin As, Turkish) and Wahb b. Husahyra (Vehb bin Hüşeyre, Turkish). ‘Amr b. al-‘Āṣ is best remembered for leading the Muslim conquest of Egypt. As al-Ṭabarī memorializes for “The Events of the Year 43 (April 15, 663 – April 2, 664)”, he also served for the remainder of his life as its governor:

In this year ‘Amr b. al-‘Āṣ died in Egypt on Yawm al-Fiṭr (January 6, 664). He has been its governor for ‘Umar b. al-Khaṭṭāb for four years, and for ‘Uthmān for four years minus two months, and for Mu’āwiyah for two years minus one month. (al-Ṭabarī, History, 18:32)

As for Wahb b. Hushayra (if the ascribed name is correct) he appears to have been a minor Companion who partook in one of the early Umayyad attacks on Constantinople. As I have fallen short on sources, I would appreciate any references to his life or a reliable identification. 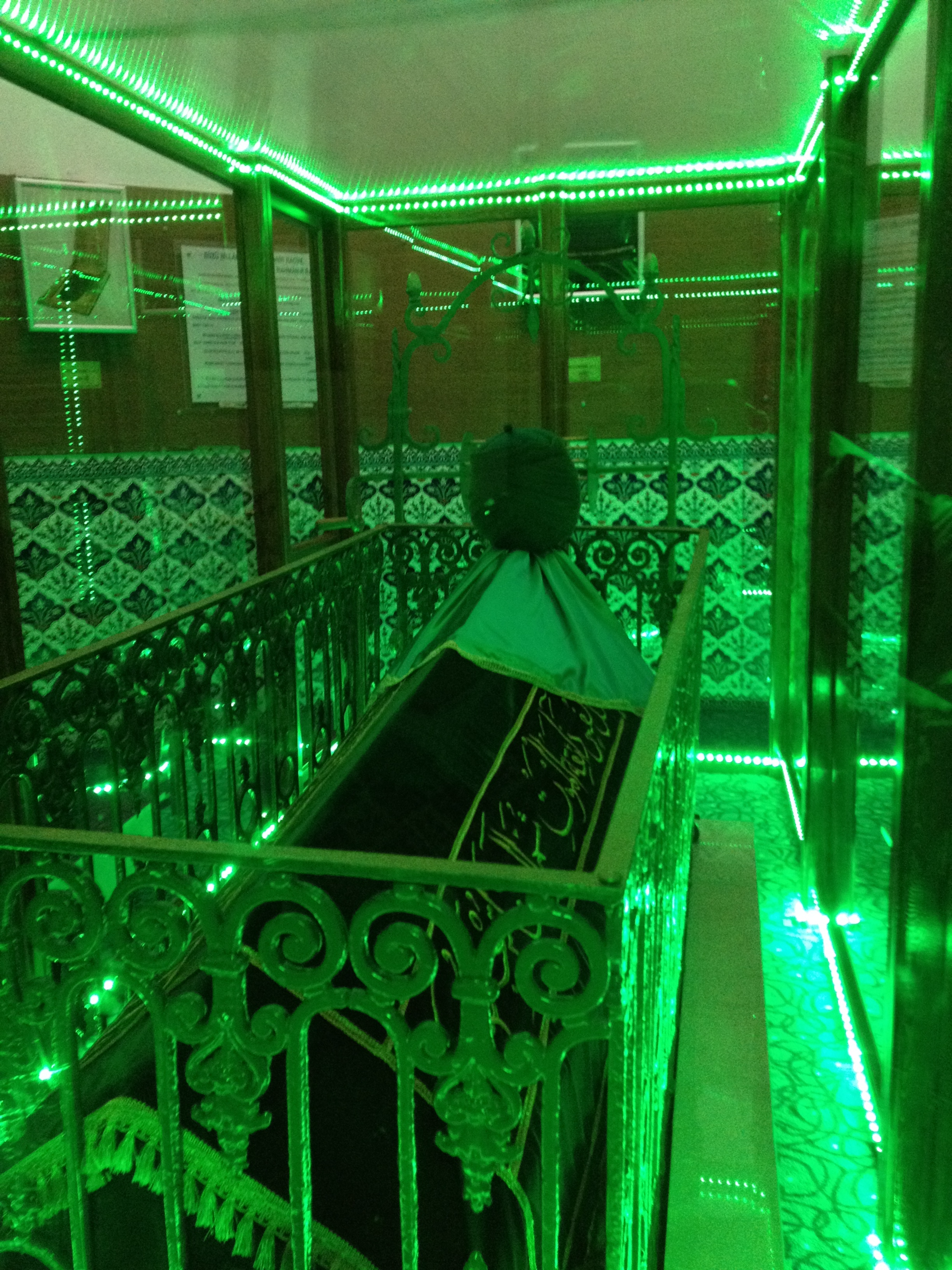 Located in a separate room is a tomb bearing the name of Sufyān b. ‘Uyayna (Süfyan bin Üyeyne, Turkish). It is possible that the tomb has been misidentified since Sufyān b. ‘Uyayna’s years of life puts him later than the generation of the Companions. The actual person buried here may be another (Abū?) Sufyān. Nevertheless, Sufyān b. ‘Uyayna is a revered figure in the Islamic tradition. From Kufa, Sufyān was a noted hadith transmitter, exegete, and jurist. He studied with al-Zuhrī (d. 124/742) and went on to teach al-Shāfi’ī (d. 204/820). Al-Ṭabarī’s biographical entry on Sufyān states:

Sufyān b. ‘Uyayna b. Abī ‘Imrān. His kunyah was Abū Muḥammad; he was a client of the Banū ‘Abdallāh b. Ruwayhbah, [a clan of] the Banū Hilāl b. ‘Āmir b. Ṣa’ṣa’ah. Sufyān’s father, ‘Uyaynah, was a functionary of Khālid b. ‘Abdallāh al-Qasrī. When Khālid was dismissed from [his office as governor of] Iraq and replaced by Yūsuf b. ‘Umar al-Thaqafī, the latter pursued Khālid’s functionaries, so they fled from him. ‘Uyaynah b. Abī ‘Imrān went away and settled in Mecca.

According to Ibn Sa’d > Muḥammad b. ‘Umar [al-Wāqidī]: Sufyān b. ‘Uyaynah told me that he was born in the year 107 [725-6]. He had pursued knowledge at an early [age] and became a ḥāfiẓ. He lived a long life, until his peers died and he outlived them.

According to Ibn Sa’d > al-Ḥasan b. ‘Imrān b. ‘Uyaynah, Sufyān’s nephew: I was with my uncle on the last pilgrimage he made [to Mecca], in the year 197 [August 813]. When he was at Jam’, having prayed, he lay on his mat and said to me: “I have arrived at this place for seventy years, and each

time I said ‘O Lord, do not make this the last time that I visit this place.’ I feel embarrassed before God about asking Him this so many times.” Sufyān returned [from his pilgrimage] and died the next year, on Saturday the 1st of Rajab 198/February 25, 814. He was buried at al-Ḥajūn. He was ninety-one years old [when he died]. (al-Ṭabarī, History, 39:265-6)