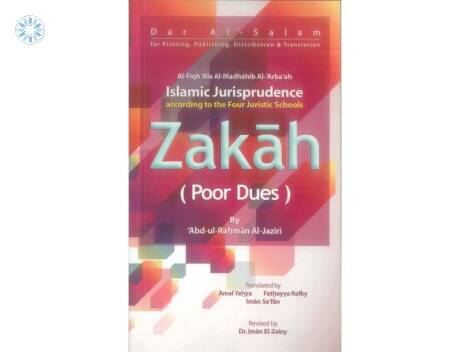 Islamic jurisprudence according to the four juistic Schools Zakah (poor Dues) This book is a translation of the section on zakh from the Arabic book entitled Al-Fiqh la Al-Madhhib Al-rbah (Islamic Jurisprudence According to the Four Juristic Schools) edited by bdul-Rahmn Al-Jazr. In this book, the opinions of the famous four Juristic Schools are compiled and juxtaposed. This English version gives the non-Arabic speaking Muslims a chance to know more about zakh rulings according to the four juristic sunni schools. This is expected to help them perform this article of Islam in consonance with Islamic rulings, and choose the opinions which are more appropriate to their communities, in case of difference in legal opinions. Further, it is an important source of information to non-Muslims on zakh which is the third pillar of Islam and the cornerstone of the Islamic economic and social systems. It is through zakh that the problems of poverty and social disintegration can be settled.